First of all, THANK YOU for your interest in my project, Marcel The Muscle Man !

If you've made it this far, you're likely aware that Marcel The Muscle Man is the title of my thesis film, the 15 minute short that I filmed during the Fall of 2021 for my MFA in Filmmaking at the City College of New York.

The Latest: This semester (Spring 2022), the film is in post-production! This will includes editing, special effects, coloring, sound editing, soundtrack composition, promotions, and all-around getting the thing before your eager eyes! There are plenty of expenses involved, so it's not too late to help offset these costs and get Marcel onto the screen! See below on how to help/learn more, and scroll all the way on down for updated budget details.

LOGLINE
Marcel The Muscle Man is a stylized comedy that follows a muscular but meek fella, who struggles to land a job, and all the while, strains under the weight of the expectations of masculinity. Desperate for work, he miraculously lands a job performing as a circus strongman, which he's pretty good at, but he questions if he's man enough for the job.

SYNOPSIS ( spoiler alert! )
Marcel is on an odd and increasingly desperate job hunt. Assumptions are made of him. He can barely get a word in. It does not go well. That is, until he's on the subway and happens to catch the attention of a circus performer (human cannonball) who recruits Marcel as the circus’s new strong man.

Though nervous, Marcel takes the gig and ends up performing superbly at his debut, delighting both the audience and the somewhat creepy circus manager. After yet more vaguely uncomfortable, but harmless encounters with his circus peers, Marcel is about to leave after his first performance, but reacts hysterically when a mouse scampers by, embarrassing himself in front of his new coworkers in this overtly un-manly act.

Drinking away his humiliation with a cosmo at a nearby bar, he is surprisingly joined by Squib, who gets his own cosmo alongside Marcel in a fraternal solidarity. They are joined by the clown who orders a mocktail for himself, and Marcel takes comfort in the fact that while he might not be the macho man so many people peg him to be, he seems to have made some friends.
At this point, I hope you find yourself now thinking "Hot damn, that sounds like fun! How can I be a part of it?"

​Well, in the simplest of terms:
Yep. That's the truth. I need help, and by help I do, indeed, mean money.

All donations are immensely appreciated, and no donation is too small.
This fundraising endeavor is a little unorthodox, I know. I'm bypassing today's conventional means in the interest of frugality and simplicity. That's why all donations are handled by me, personally, and preferably through the following means (as no fees are attached):
DONATE VIA
Venmo (personal link)
Zelle with my gmail or phone #
Facebook Pay
FUNDRAISING FAQ​
WTF is this?
Is it safe and legit?
Can I remain anonymous to you?
Can I remain anonymous to the public?
​Is it tax-deductible?
​Doesn't your school have a better way to fundraise?
Why doesn't your school pay for it?
​Can't you just make a cheaper movie?
If I donate, can I make any profit from the film?
It still feels weird, dude. You aren't gonna Bernie Madoff me, are you?
​
WTF is this? Why aren't you doing a Facebook Fundraiser or GoFundMe or Kickstarter or any other normal fundraising platform?!
Good question. Simply put, if you want to donate " X " dollars, I'd love to gratefully accept " X " dollars. If I were to use one such fundraising platforms, I would receive " X minus fees " dollars. That's money you'd like to donate that isn't getting donated.
... but is it safe and legit?
Yes and yes. I have used all the transaction services listed above the FAQ section with ease and peace of mind. I trust them. You can, too. Regarding personal legitimacy, it's just as legit as handing me a $20 bill or a $5,000 check, and saying, "good luck with your movie". I'll be tracking all donations, and will be transparent about where your money's going.
I want to donate, but can I do it without you knowing that I did?
I guess? If you feel like creating an account under a fake name with a service mentioned above, I can't stop you, but that sounds like work. I don't want you have to do work. Besides, when I see the money with your name, I will want to send you a confirmation ... and mushy gushy "thank you".
I want to remain anonymous to the public. You won't put my name on stuff will you?
Not if you don't want me to. I'd love to praise people publicly (social media), so if you'd rather not be tagged / mentioned in such a way, you must tell me. Similarly, if you'd rather NOT have your name in the end credits, you must also tell me because that's also a place I want to boast of your kindness.
Is it tax-deductible?
No, I'm afraid not. I'm operating as an individual as opposed to a non-profit, and I am not working with a fiscal sponsor ... but your accountant might have studied with Leopold Bloom, idk.
Doesn't your school have a better way to do this?
No. Some film schools do have just a little bit more to offer in finessing the raising of funds, but alas my program does not. I've considered the transactional avenues above, and believe that your generosity and trust in me will be the greatest factors funding my film.
Doesn't your school fund your film? It's your thesis for crying out loud!
No. Well, not directly. A lot of production costs are covered in-kind. That is, I have some equipment, locations, and the talents of my classmates with the guidance and support of the faculty. Additionally, as many others like it do, my program covers a portion (not all) of insuring the thesis productions. Making movies is expensive, and costs stack up very quickly.
Why don't you make a cheaper movie?
Well, you could say that I did ... take notice of the Academy Award-shaped void on my desk the next time you visit. In fact, my thesis script has been very modified from its ambitious incarnation in large part because of the costly production elements. It's hard to shoot for the moon with a cork pop gun, but that said, the creative changes have made for a pretty snazzy pop gun.
Does donating mean I can potential make money from this film?!
I'm afraid not. It's just that: a donation. It's not an investment with potential returns. In truth, short films pretty much never make money. If it makes you feel better, you'll make pretty much the same amount off of this as I will. You're just being way cool, and helping a guy out.
It still feels weird, dude. You aren't gonna Bernie Madoff me, are you?
No. Way. Look, I get it. It's weird. Making movies is weird. Asking people for money is weird *ugh*. Asking people for money to make a movie you wrote, are starring in, and directing is very weird. I will straight up show you the budget, and how your money is spent right here on this webpage. I'll do what I can to make you feel less weird, and if we're lucky, at the end of all of this, you enjoy a little film that YOU will have helped create, and I gotta say, I think that's pretty cool.

Besides, "A scout is trustworthy", and I got the big boy badge to back me up.
​
The Budget Top Sheet
Here's the latest version. These numbers reflect how we shot the film, and includes a great degree of talented volunteerism, but is not yet exhaustive as some receipts and invoices are still being gone through. That said, we're looking rather good and under-budget on the whole! Also, this budget only modestly accounts for post-production, which is being assessed presently. 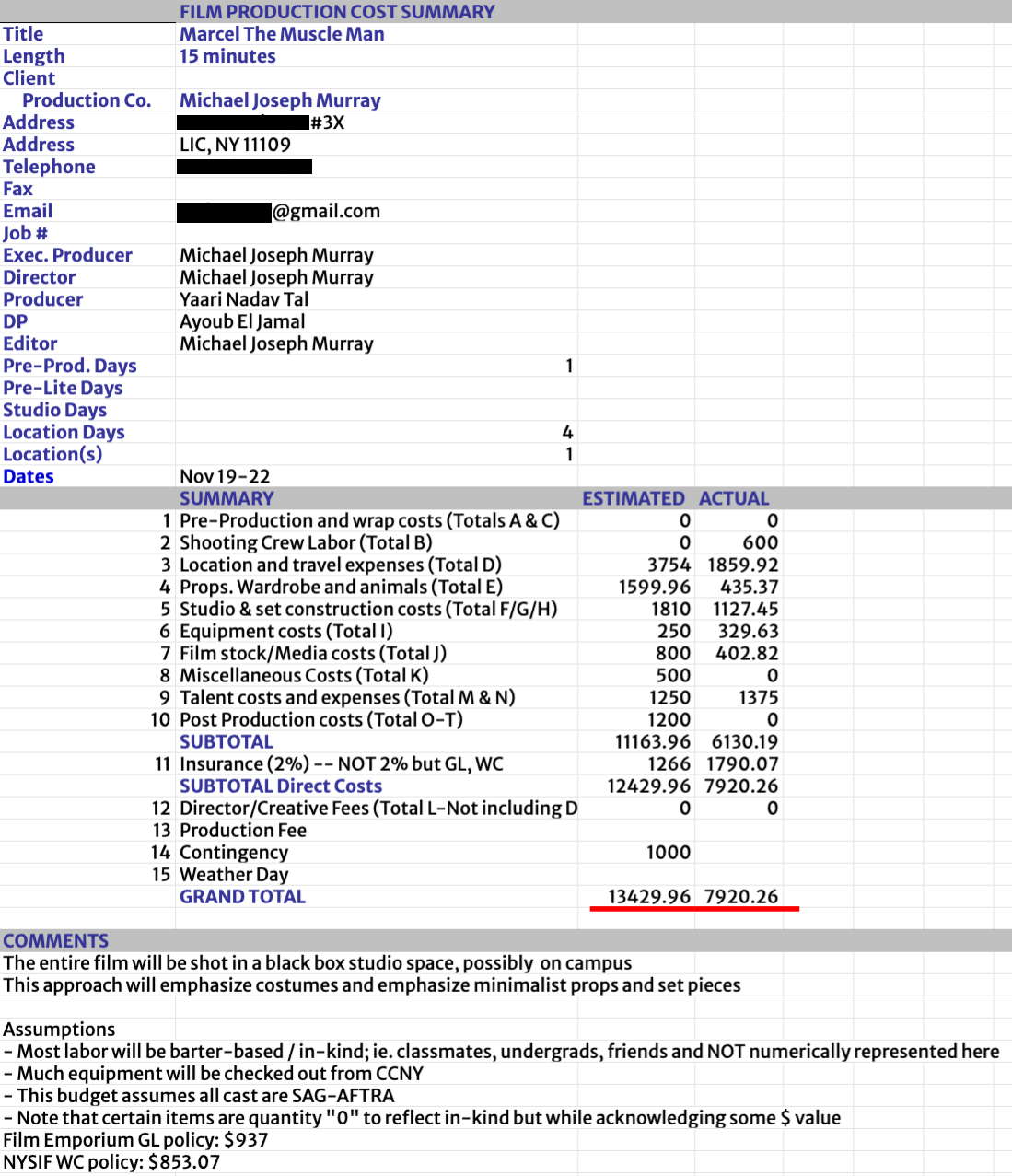 THANK YOU
to all that have already helped bear the weight for Marcel!
​We've lifted:
$3,829.81